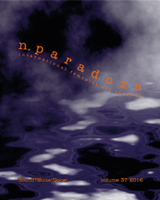 Marie’s article ‘Creaking, Growling: Feminine Noisiness and Vocal Fry in the Music of Joan LaBarbara and Runhild Gammelsaeter’ is now available. It’s published in Volume 37, SOUND?NOISE!VOICE! of the feminist art journal, N.Paradoxa. Copies of the journal are available to purchase here. A text-only version of the article can be found here.

In recent years, much media attention has been paid to the phenomenon of ‘vocal fry’ – a creaking, growling affectation that occurs when the voice is in its lowest register. Vocal fry has been understood as a specifically feminine affliction. Yet this vocalisation is neither new nor gender specific; indeed, vocal fry has long been used in music as a means of aiding expressivity and generating unusual vocal sonorities. In this article, Marie Thompson interrogates the phenomenon of vocal fry and its use as a musical resource. She argues that vocal fry, as it has been characterised in recent accounts by ‘feminist’ and media commentators, connects to a historical lineage of ‘feminised’ noise. In Eurocentric cultures, feminine vocal qualities and speech have long been admonished as ‘noisy’ – that is, unwanted, irritating, meaningless and damaging. She also examines vocal fry’s utilisation in music in relation to the work of Joan LaBarbara and Runhild Gammelsæter: arguing that if LaBarbara extends the creak, Gammelsæter extends the growl. Consequently, Marie Thompson proposes that LaBarbara and Gammelsæter’s work can be interpreted as alluding to the connections between noise and femininity.

In December the ESP group had their first ‘outing’ at a Lincoln School of Film and Media seminar. Members from the group presented on their current research, practice and pedagogical activities, using the seminar as an opportunity to discuss their work with other members of the group and the audience.

What was particularly useful was the seminar’s concluding discussion/Q and A. This gave us an opportunity to tease out some common ground
between our individual projects. Though working in different fields and
with different media, we seemingly share an interest in questions of matter and materiality; and the (micro- and macro-)politics of sonic/artistic practice. Louise Lawlor has written about the research seminar in relation to her own (excellent) work here.

ESP are now looking forward to a lively 2016, with plans for some sound-based events and discussions in the pipeline.

Extra Sonic Practice is an informal network of practitioners and researchers interested in sound. This will be viewed as an expanded field of practice, focussing on the role of the sonic in multiple contexts and configurations. The varied individual practices and research interests of the key members will condition the aims of the group and act as a framework for discourse and activity. ESP will be concerned both with instigating and enhancing sound practices in pedagogy (through knowledge transfer) and working to create an interdisciplinary research base. This research seminar will introduce the current work of members of ESP, which includes practice-based research on the foregrounding of sound in film, live telematic improvised sound, vocal fry and experimental sonic practice, expanding and exploring the notion of synchresis, and multichannel electronic music composition.

Marie Thompson’s research centres on the material and affective dimensions of sound, noise and music. She is the co-editor of Sound, Music, Affect: Theorizing Sonic Experience (Bloomsbury, 2013) and is currently working on a monograph for Bloomsbury based upon her PhD research on noise, affect and ‘aesthetic moralism’. She is also occasionally active as a musician/noisemaker.

Emily Wilczek is an occasional artist, curator, filmmaker and writer, interested in experimental and amateur approaches to media. She has performed in improvised sound ensembles making live soundtracks to films including F.W. Murnau’s Sunrise, and Watch the K Foundation Burn a Million Quid. She co-curates Annexinema showing artists’ moving image and sound in unusual locations. Her recent film work explores how sound can be prioritised and accompanied by an imagetrack.

Currently, as an artist, working in collaboration with composers, musicians & sound artists, I’m interested in mixing the use of old and new technologies and working methods to create what has been variously called eyemusic, visual music, or abstract cinema, though realising the terms themselves carry an implicit hierarchy. Being interested in words too, I use the palindrome “sonikinos” to describe this collaborative work as an attempt to equalize this super/sub/ordinate relationship.  My reflective research and thinking around this practice takes, as it’s starting point, Michel Chion’s concept of synchresis.

My work has and continues to cover a range of activities: making audiovisual work for single-screen and gallery installation, live mixing and projection of video and digital material for performance. I have worked as a facilitator of arts education project work with regional, national and international arts organisations including, Sonic Arts Network (now Sound & Music) The Philharmonia Orchestra, Huddersfield Contemporary Music Festival and 21CC, the BBC digital learning centre and as core artist with Salamanda Tandem, a company which creates, multi-media performance events shaped and determined around the distinctive abilities of the people who participate.

Annie Morrad is an artist who works with improvised sound using alto and tenor saxophone. This takes the form of working with live events, digital elements, browsers, interior and exterior locations. The research explores the possibilities of improvised sound and digital platforms. Annie has worked with other musicians, installation artists and filmmakers. Producing collaborative work that addresses experiential, experimental and phenomenological outcomes. This has resulted in live performances with a Sydney based musician, utilising Skype as a method for performing. Live improvising with Film presentations and a variety of gallery based installations.

David McSherry is well known as one half of Fila Brazillia, the electronica collaboration from Kingston upon Hull. Since the 1990s Fila Brazillia have released 10 albums, over 90 remixes, have collaborated with the likes of Harold Budd, Stephen Mallinder (Cabaret Voltaire), and Greg Dulli (The Afghan Whigs), as well as having their music included in numerous films, TV programmes and adverts. David has recently produced music for the Frequency Festival trailer and has been commissioned by Lincoln’s The Collection to compose a piece of music to accompany Lothar Goetz’s Russell Chantry show. David has worked closely with The Collection’s sound wall – a unique 22 speaker hidden sound wall built into the fabric of the museum – and is particularly interested in exploring its potential as a musical instrument. For his forthcoming show his starting point will be the appropriation and recomposition of sacred music using only sine waves.